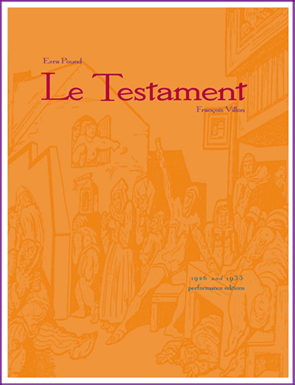 Pound revised his opera in 1926 and again in 1933 to accommodate reduced performing forces. Additionally, musicians in his immediate circle, such as concert violinist and new music specialist Olga Rudge, resisted the mathematical acrobatics required to interpret the irrational rhythms notated in 1923 by George Antheil and urged a more practical version of the opera. Each new version presents a new rhythmic basis for some of the numbers.

In 1926 Pound rented the Salle Pleyel in Paris to preview 9 numbers from his opera and a newly composed overture for a long horn he called the “cornet de dessus,” designed to demonstrate his newly developing theory of Great Bass. Pound reduced the performing forces to tenor, bass-baritone, violin, harpsichord, 2 trombones, and kettle drums; and he revised the rhythms to a new 5/8 basis. Virgil Thomson, who was in the audience, wrote in his memoir, “The music was not quite a musician’s music, though it may well be the finest poet’s music since Thomas Campion. . . .It bore family resemblances unmistakable to the Socrate of Satie; and its sound has remained in my memory” (Virgil Thomson).

Several discrepancies in the manuscript tradition have been resolved for the 1926 performance edition of Le Testament. Download.

Pound’s 1933 final, complete version of the opera, only recently discovered, followed on the heels of the 1931 BBC broadcasts of Le Testament. With the 1923 Antheil version proving too difficult for the musicians, music producer Denis Freeman and conductor Leslie Woodgate were compelled to substitute many of the earliest versions of the arias that had been taken down by Agnes Bedford to Pound’s dictation (1920 to 1921) and layed out by her in score form. After all the trials and errors, the 1933 version was to provide the composer’s authorized (and practical) performance edition. While Pound revised the rhythms of many numbers on a 3/4 and 4/4 basis, he retained the signature irrational meters of the opera’s middle numbers, “Heaulmière's aria,” “Or y penser,” and “Dame du ciel.” The performing forces call for 9 or more singers, and 10 to 12 instruments.

The one-act opera dramatizes the hour in which French poet François Villon (b.1431) pens his most famous poem, Le Testament.

Scene One: a square fronted by a brothel, a bar and a church in Villon’s Paris, circa 1462. Condemned to death and with a warrant out for his arrest, Villon sits before the tavern writing his “last will and irrevocable testament.” Too poor to have material goods, he wills his poetry and his wit to friends and enemies alike. Three arias on the pervasiveness of death, and two arias of regret for lost youth and for lost beauty set the mood: time is the evil. This is confirmed with the boisterous arrival of the old whore Heaulmière who sings of lost charms and old beaux. A procession of colorful characters from Villon’s Paris follows (depending on the version performed): a gallant en route to the brothel sings of love; Villon’s mother sings for the salvation of all; Bozo the drunken brothel keeper sings of his sordid life with Fat Margot; the spent gallant stumbles from the brothel to renounce love. The scene climaxes with a group drinking song in praise of Noah and the vine, the arrival of the police and the arrest of Villon.

Scene Two: The opera concludes with an eerie and preternatural scene evocative of the Noh drama: six corpses strung from the gibbet sing for the salvation of their souls (“Frères humains”).

The book’s cover incorporates a design by Alan Odle for the 1931 BBC radio broadcast, announced in Radio Times.

“The career of no other artist, perhaps, so nakedly exposes the fineness of the line dividing crackpot from genius.... Much of it [Le Testament] is strangely compelling, if eccentric, stuff.... Performed by singers who are knowing enough to know the effect at which the quixotic rhythms were aiming, Pound’s settings can be somehow superb.... My eye kept straying back to the old French original, which I understood far from perfectly but which nevertheless spoke to me through Pound with uncanny force.

“That went for all the other poems in the Villon ‘opera’ as well: the 80-year-old whore Hëaulmiere’s frantic lament over her withered charms (the opera’s mad scene, if you will, or as Pound called it, ‘the fireworks’); the poet’s mother’s appeal to the Virgin Mary for salvation (set exquisitely by Debussy, infernally by Pound in a manner that conveys a believer’s fear); the drunkards’ prayer (‘Père Noé,’ performed by a raucous chorus with amazing turn-on-a-dime precision); and finally, ‘Frères Humains,’ the bone-freezing plea, in weird Martian-medieval barbershop harmony, of a line of hanged corpses, Villon among them, for fellow feeling. No doubt about it: as George Szell once said of Glenn Gould, that nut was a genius.” Read the entire review.

For the publication of Pound’s complete oeuvre of music, Robert Hughes and Margaret Fisher received a Lifetime Achievement Award from the Ezra Pound Society (2014).

Robert Hughes, composer, conductor, and bassoonist, met Pound in Washington, D.C. Their brief discussion about music led Hughes to mount Pound’s first opera Le Testament with the San Francisco Opera in 1971. He assembled Pound’s complete second opera Cavalcanti from manuscripts that had become separated over time and premiered that work in San Francisco with the Arch Ensemble for Experimental Music. He has also published performance editions of Pound’s complete works for violin, and is conductor/artistic director of two audio CD’s of Pound's music.