Co-created by Charles Amirkhanian and Margaret Fisher for the Arch Ensemble for Experimental Music based in Berkeley, CA, Egusquiza to Falsetto takes its name from the spine of an encyclopedia volume. The music score is for nine instrumentalists, vocal quartet, water cooler, and an electronic tape made from sounds of the Pacific Ocean at Aptos, California, and a stream wending its way through the regional Parks Botanic garden in Tilden Park, Berkeley.

The essence of the work lies in the unassuming intimacy developed among the players. Musicians are encamped on two levels to give the uncontained sense of an outdoor scene without the use of a backdrop or other props. The percussionists are housed within a white tent on the second level. A ten year old boy writing at a desk is seen on the second level. Instrumentalists lie on their sides under blankets, their knees folded into their chests. The oboist lies atop the violist, each on their side, as though the vertical side-stacking of bodies were an ordinary sleeping arrangement. The bassoon hangs horizontally above the head of the bassoonist. A male vocal quartet recites text sound poetry. At one point the somnolent mood is broken by loud percussive intrusions that cause the tent to billow and flap. The cellist mouths the silent scream of a bad dream, curls up and appears to sleep once more. The boy at the desk leaves his chair and softly strikes three Buddhist temple bowls with a small mallet.

Several of the members of the Arch Ensemble had been members of the Ghost Opera, a San Francisco improvisational company which used theater games to provide sensitive guidelines for impromptu playing. Margaret Fisher, a practitioner in new dance media, worked the scale of the human figure at odds with the scale of her environmental constructions to bring human gesture into high relief. Her movement choices often resulted in musical choices, and vice versa. Charles Amirkhanian’s music is the third of a series of pieces for chamber orchestra. This work extended his interest in mixing sound poetry texts with the recordings of ambient sounds. More details about the work are found in the reviews below. 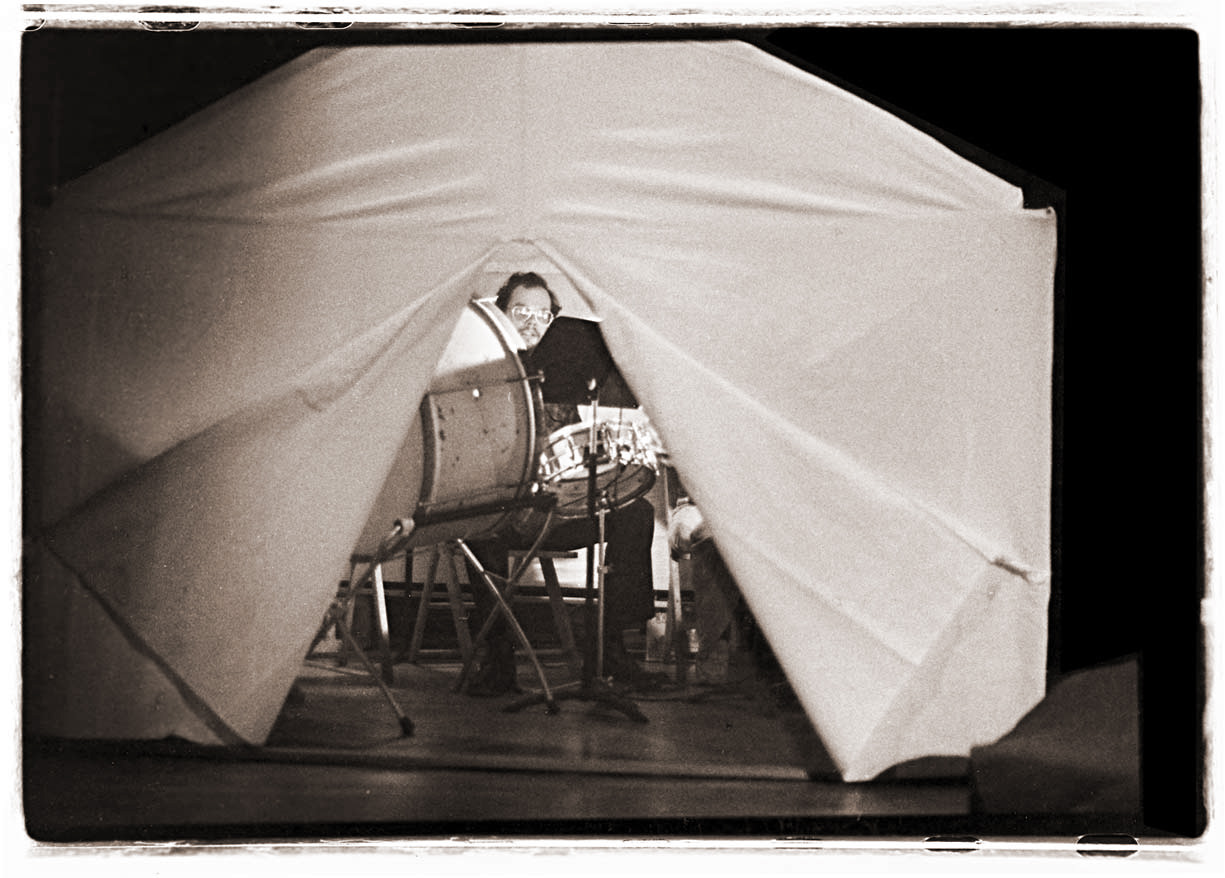